What is Bad Debt? 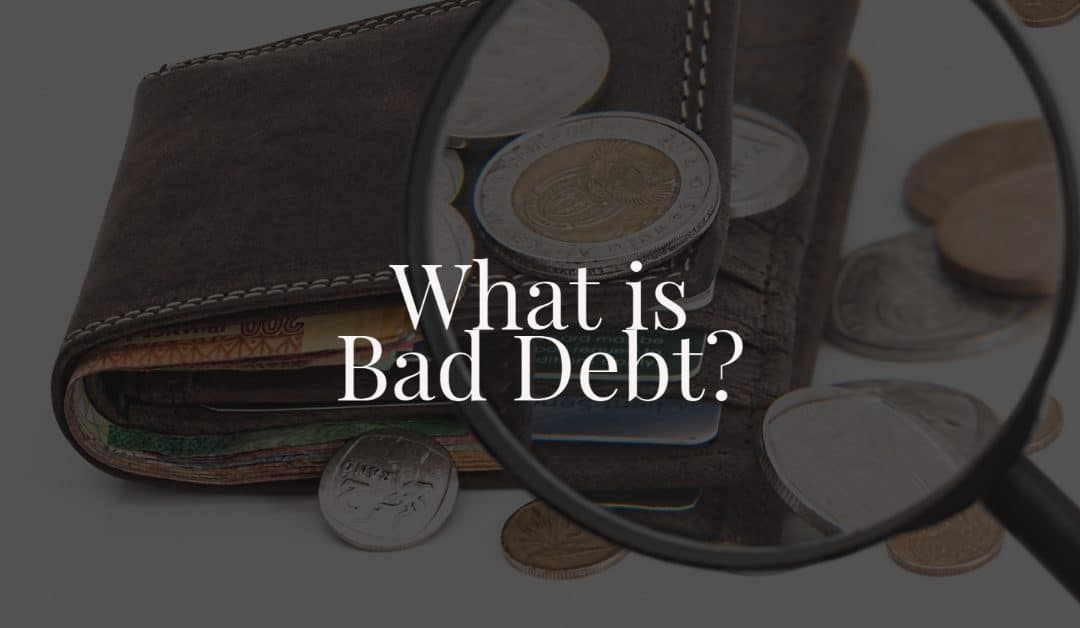 Have you have ever forgotten to pay a bill or couldn’t pay a bill and the creditor eventually quit contacting you for payment? If so, you were responsible for what is considered “bad debt.”

Anytime a consumer does not pay a debt and the creditor writes it off, bad debt is created.

According to CNBC, an average American has $90,460 in total debt. (1) But all of this is not bad debt. Many kinds of debt an average person owes are considered normal in the US.

We as consumers have two kinds of debt that are not generally considered bad: revolving and non-revolving. These types of debt are not “bad” unless we stop paying them according to the agreement with our creditor.

Most of our debt as Americans is non-revolving. With non-revolving debt, we pay every month according to a schedule: car loans, home mortgages, student loans. This kind of debt made up 74% of all consumer debt in the US in February 2020 and was at 76% in October 2020. (2)

Revolving debt is what you owe to an account that allows you to borrow against a credit line. You owe the money but don’t have to pay a scheduled amount every month on the debt. Credit cards are examples of this type of debt.

According to recent data from the Survey of Consumer Finances by the U.S. Federal Reserve, the average credit card debt of U.S. households is approximately $5,700.

What Happens if I Have Bad Debt?

Owing money to a service provider can evolve into bad debt when the company writes off the bill and assumes you will not pay them even if they keep wasting their money and resources sending you bills.

For example, if you don’t pay a bill of $10,000 to a hospital, they will continue to bill you for a period of months. You can call during this time to negotiate the bill or set up some type of repayment plan with the hospital’s billing department.

Many creditors have departments that deal specifically with billing and are authorized to negotiate a bill.

However, after a while, the hospital will decide that they are wasting time and money continuing to call or bill you. This is when they “write off” the debt as “bad debt”.

Basically, they put the amount you owe down in their books as lost money. At this point, they may sell your debt to a debt collector.

Your credit score may have already dropped or it may drop after the hospital writes your debt off and sells your bill to the debt collector.

This means that debt collectors have the potential to make quite a bit of money if you pay a bill. In fact, they will make $9000 if you pay the entire amount of this particular bad debt.

Should I Pay Off Bad Debt?

In general, if you have new bad debt and good credit, it makes sense to pay your bad debt. If your credit is already really low and it has already been a period of years, you may wait out the 7 years time that debt generally takes to fall off your credit report.

But beware if you decide to wait— your low credit score will effectively prevent you from getting loans or credit cards. If you do get a credit account, you will generally pay thousands more in fees and interest rates than someone with good credit.

According to The Balance, “if the debt is still listed on your credit report, it’s a good idea to pay it off so you can improve your credit card or loan approval odds. Keep in mind that paying the debt won’t remove it from your credit report (unless you negotiate a pay for delete), but it does look better than the alternative”. (2)

Can I Have Bad Debt Without Knowing About It?

Sometimes when you move and forget to leave a forwarding address, you don’t receive an important bill. The creditor who is owed money can’t find you easily enough so they write the debt off as “bad debt”. A bad debt can also appear on your credit report because of a fraudulent charge or an identity theft issue.

If you find bad debt that you don’t owe, you can go through a dispute process with the credit reporting agency or contact the company holding the debt directly to find out more about the debt.

Credit reporting agencies and creditors alike often make mistakes and fraud happens regularly also, so it is a good idea to check your reports regularly.

Is Bad Debt a Problem for Our Country?

In 2020, according to CBS News, Bank of America reported that their bad loans have doubled to nearly $20 billion from $10 billion last year.

“Banks always forecast that some percentage of their loans will go unpaid and then set aside money to cover those losses. But in the past six months, the expected loan losses have spiked at the biggest banks.

JPMorgan Chase is predicting the bank could have to cover $32.1 billion in bad loans. That’s nearly triple the $13.2 billion the bank was predicting a year ago.” (4)

If large creditors start losing money because average consumers cannot pay back what they owe, our country could have a problem similar to the Great Recession in 2007–2009.

If you are in over your head with bad debt, you may need the advice of a knowledgeable and experienced consumer protection attorney. Many creditors and debt collectors take advantage of a consumer’s lack of knowledge about debt and interest rates.

They employ tactics such as subprime lending or tack on fees and insurance that you shouldn’t owe. Debt collectors often break consumer protection laws to collect money from consumers.

If you are harassed by any creditor or are unsure about your next step with debt, contact an attorney at LawZebra. We are a network of attorneys across the nation experienced in consumer protection and we are on your side.